Rita Jones Murder Mystery.
​On Boxing Day 1899, eight year old Rita crossed the bridge over Sunday Creek, Broadford on her way to buy some apricots for her mother. She was spotted later crossing the bridge on her return journey. She then disappeared. 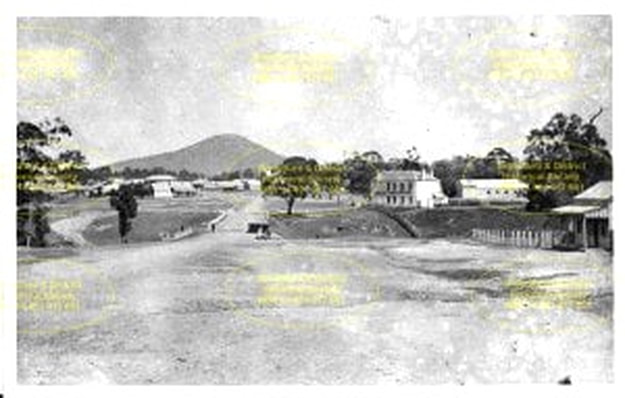 This picture of the bridge over Sunday Creek, Broadford, shows how the town looked at the end of the 1800s. This was the town that Rita Jones knew so well. On Boxing Day 1899, eight year old Rita crossed this bridge on her way to buy some apricots for her mother. She was spotted later crossing the bridge on her return journey. She then disappeared.

Using articles from The Argus & Broadford Courier, and details acquired from the Public Records Office and the Victoria Police Museum, the Broadford & District Historical Society will attempt to tell the story of Rita Jones – a sad tale in the history of Broadford.

The newspaper articles
1.   A MISSING CHILD:
This initial article was published in the Melbourne Argus, on Thursday December 28th, 1899. We thank Peter Wright for his research:

“BROADFORD, Wednesday.  A little girl named Rita Jones mysteriously disappeared yesterday. The child, who is eight years old, and who is living with her grandfather, left home about half past 11 yesterday morning to buy some fruit at a shop about half-a-mile distant. When lunch-time came and the child did not return, not very much notice was taken, but after a couple more hours had passed and still the child did not appear, inquiries began to be made. Nothing more definite could be ascertained than that the child had left the fruit shop at 12 o’clock. At 6 o’clock last night search parties started out to try and gain tidings of the lost girl, and the search has been kept up continuously ever since, but no clue of any description has been obtained. The Sunday Creek has been dragged for a considerable distance, but with no result. What makes the affair more mysterious is that the child’s home is close to the main road, and the shop the child visited is on the main road, so that there was no occasion for the child to leave it. Over 50 men are engaged in the search.”

2.   A HORRIBLE CRIME: MURDER OF A LITTLE GIRL. HER BODY TERRIBLY MUTILATED.
This article was published in the Melbourne Argus, on Friday 29th December, 1899

“BROADFORD, Thursday. (By our own reporter)  Rita Jones, the little girl who disappeared on Boxing Day has been found dead, and her body is so mutilated that there is no doubt she has been brutally murdered.

The victim was a little girl of eight, who was a general favourite in the township. She was born in Melbourne, but on her father, Mr. Thomas Jones, accepting the position of mining manager at Wyalong seven years ago, she came to live with her grandparents, Mr. and Mrs. Alfred Temple, old and respected residents of Broadford. On Boxing morning the little girl was at home, assisting her grandmother until shortly after 11, when she remarked to Mrs. Temple that she would get some fruit. She left the house, met another girl of 12, named Sarah Brace, and walked down the lower part of the township to a shop on the opposite side of Sunday Creek. She purchased a bag of apricots, and then left her companion, and started to walk home. At a quarter to 12 she was seen on the bridge over the creek by Mr. W. Parker, baker, of Broadford. She then suddenly disappeared. As dinner time approached the Temple family were at a loss to account for her absence. Mrs. Temple despatched several of her own children, some younger than little Rita Jones, to find her grandchild. Inquiries were made all round the township, and as they were unsuccessful, the family became much alarmed. During the afternoon individual residents of the township assisted the family to search for the child, and at 5 o’clock an organised search party examined the country surrounding the route taken by the girl. A large section favoured the theory that the child had been drowned in the creek, a narrow but deep channel meandering through the middle of the township. The deepest holes were dragged on Tuesday night, and the search was not abandoned until (?) o’clock on Wednesday morning. Four hours later the search was recommenced, and over 150 residents assisted to scour the country for a radius of eight miles. The creek was systematically dragged for a mile each way, and no trace could be found of the child, while Mounted-constables James, Wright, and Cawsey rode out in all directions. At midnight the search was again abandoned, and preparations were made to renew the work to-day. Until this morning there was no idea of foul play within the township, though a suspicion that the child had been decoyed into the bush led to the arrest of two swagmen. These men had little difficulty in proving their innocence, and they were released, a charge of vagrancy entered against them being withdrawn.

This morning Constable Wright, of Tallarook, who was foremost in the work, decided to search the premises in the township itself, and he commenced with Mr Edward Doherty’s butchery establishment. It is a large two-story brick building of 15 rooms, and was formerly the Sunday Creek Hotel. It stands on the banks of the creek, only 50 yards from the bridge. There is a brick stable and a washhouse in a paddock 30 yards at the rear of the building, and a long, low paling fowl-house the same distance further on. In one compartment of the fowl-house Constable Wright found the floor littered with straw and rubbish to a depth of 2ft. Clearing this away revealed a row of nests, forming a sort of bench along the back of the shed. This was also filled with straw, which being removed a bag was found. Wright, still unsuspecting its bearing on the disappearance of the child, dragged the bag out and tore it open, to reveal the mangled and charred remains of the little girl. The body was doubled up, with one foot on each side of the head. The skull was smashed into a pulp by a blunt instrument, and the face and the front of the body were charred. The corpse had lost all human semblance, but a hat and portion of the skirt proved the identification beyond question.

Information was despatched to the Detective-office in Melbourne, and Detective-sergeant Whitney arrived here by the 20 minutes past 4 train. An examination of the butchery establishment showed that an attempt had been made to burn the body in the copper attached to the stable. A portion of clothing and boots was found in the ashes, and a long trail, where the burden was dragged, could be seen in the dust, from the copper to the fowlhouse. The bag of apricots purchased by the little girl was discovered on the other side of the fence adjoining the washhouse, where it had evidently been thrown by the murderer. The body was removed to the Broadford Hotel, where an inquest will be held.

The perpetrator of the crime is not known, but suspicion has fallen on William R Jones, who is no relative of the child, but who has been employed at Doherty’s for the past fortnight. Jones is a man of 42, with a wife and family, and is well-known and respected in Lancefield. From his conversation he appears to have been in Queensland until the past few months. He was first known in Broadford when employed at Mr Arthur Mason’s farm at Prospect Hill, three miles away. He used to call at the township, and get drunk, but exactly a fortnight ago he left his situation, and applied to Mrs Doherty for work, knowing that her husband required another assistant. She engaged Jones, and he has since been working there. Mr Doherty combines the business of a butcher with farming, and does not live on the butchery premises, leaving Jones since his engagement to fulfil orders. On Boxing morning Jones was left at the shop at about 12 o’clock by Arthur Tout, a nephew of Mr Doherty. During the afternoon he was not seen but at 3 Mr Wilson Clarke, of the paper mills, on the opposite side of the creek, saw a man in a butcher’s jumper light Doherty’s copper. Some minutes later the man left, and the time corresponds with the visit of Jones to the Broadford Hotel, 100 yards distant. After drinking at the hotel Jones returned towards the shop, and Clarke saw a man in a butcher’s jumper again at the copper. During the evening the search party at the creek saw the fire burning. Jones, who had been drinking since the commencement of the holidays, spent the night crossing to and from the hotel. Albert Wilson, assistant to Doherty, visited the shop for a few seconds during the night, but saw nothing of Jones, and concluded that he was on a drinking bout. This supposition was confirmed yesterday morning, when Wilson opened the shop and found between the leaves of the ledger in the office a slip of paper bearing the words in Jones’s handwriting, “Gone on the drunk”. Mr Doherty himself had not visited the shop since Christmas Day.

The suspected man was last seen in the township early yesterday morning, when he was walking in the direction of Melbourne, but the two disappearences were not connected, owing to his absence being ascribed to drink. The finding of the body, however, impelled the police to instant action, and splendid work was done in tracking Jones’s movements, a warrant having meantime been obtained for his arrest. While Whitney carried out his investigations in the township to-night, James and Cawsey succeeded in tracing the suspect to a spot four miles past Kilmore. James then returned here, and Cawsey went on to Lancefield, and Wright is following up information regarding a man answering the same description reported from Craigieburn. Whitney has telegraphed to all the police and railway stations in the district, and an early arrest is very probable. The suspected man is described as 42 years of age, 5ft. 9in. or 5ft. 10in. high, stout build, fair complexion, fair hair, and clean shaved, except for a fair moustache and small side whiskers, with a flat nose, as if broken. When he left here he wore a black sac(?) coat and vest, light trousers, and a new black soft felt hat, striped tennis shirt, with attached collar, black and red striped tie, and laceup boots much worn and with fancy toes. He was carrying a blue woollen rug, and had a blue jumper and new blue butcher’s apron. Jones had seen the little girl several times, and was noticed to compliment her on her prettiness, giving her small presents.

The grandfather of the victim is a prominent member of the local Mounted Rifles, and is, like his wife, utterly prostrated with shock. The parents of the girl have been telegraphed for, and the mother is expected here at midday tomorrow.

A post-mortem examination of the body has not yet been made, but death is apparently due to a fractured skull. Marks on the throat, however, indicate strangulation. There is no direct proof that the girl was outraged, but all the circumstances indicate that such was the case. Mr Doherty knew nothing of the man Jones before he found him engaged. Though he disliked the man, he says he did his work satisfactorily until the commencement of the holidays, when he commenced to drink. Jones made few friends among the permanent residents here, but he spent much time in the company of men passing through.” 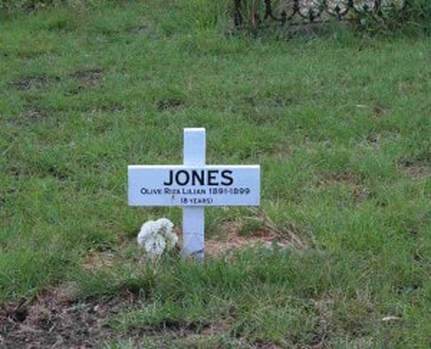 The final resting place of Rita Jones. The grave can be seen in the Broadford Cemetery today.